One of the surprising things that I have encountered living the U.S. is the difference between the taste of Japanese and American mayonnaise. In Japan, mayonnaise was introduced by the Japanese food company Kewpie Corporation in 1925. Generally, Japanese mayo is made of egg yolk, rapeseed oil or soybean oil, and rice vinegar, which creates a soft and mild mayonnaise which is preferred by many Japanese. For me, American mayo tastes more sour and salty, and Japanese mayo is sweeter. I thought maybe Japanese mayo contained sugar, but I checked and  there is no sugar.  However, there is in some American mayos. So why does it  taste sweeter? I guess that it is because American mayonnaise might use more salt and vinegar instead of rice vinegar, which is less sour.

Some of my American friends prefer Japanese 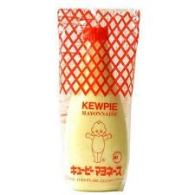 mayo to American versions. In Portland, most Japanese markets, such as Anzen market and Uwajimaya in Beaverton, sell Japanese mayo. If you are interested, it might be fun to try a different culture’s seasoning.