Spring has (finally) hit Portland. The sun is shining and I’m taking full advantage: I’ve got my Nikes on and my feet hit the pavement in rhythm to Eminem’s “Lose Yourself.” I think how nice it is to run in the fresh air after a winter spent doing treadmill workouts. Grinning to myself, I turn a corner onto the park blocks and, mid-breath, run through a cloud of second-hand smoke.

This is infuriating on multiple accounts, but the two that are most easily articulated are: 1) the smoker is no more than twenty years old, and 2) the Park Blocks are a part of PSU’s smoke-free campus.

As a non-smoker who has lost family members to cancer and emphysema, it’s easy for me to get angry, and sometimes it’s all too tempting to hit cigarettes right out of my peers’ hands. But I know that even though anger is often the catalyst for change, an end to smoking is going to require patience and open conversation. The campaign known as Truth (thetruth.com) is committed to making ours the generation that ends smoking, and it’s doing so by spreading, well, truth. Truth is continually exposing big tobacco and giving us the facts about the effects of smoking on the environment and society. For instance, did you know that a cat or dog whose owner smokes (around the pet or not) is twice as likely to get cancer?

We’re the products of the Information Age. And as such I believe that, armed with information, smokers and non-smokers can join together in the campaign to eradicate smoking. PSU has recently made the commitment to creating a healthier campus by banning smoking on all campus property, and the first contribution we can all make as Portland State students is to respect these tobacco-free zones (map below). 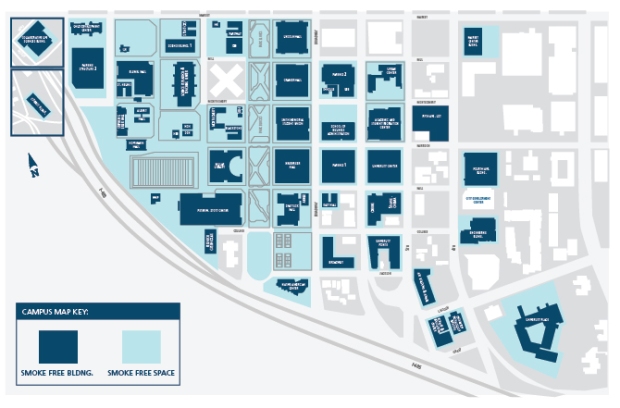