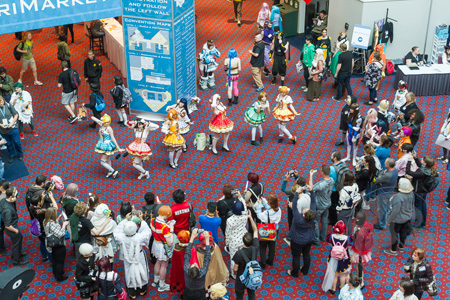 Ah, conventions – gatherings for people who share a common love of comics, anime, or other uniting things. Where else can you walk giant circles around one building all day, squeezing past people in impossibly intricate armor cosplays, trying to get in line to buy an incredibly expensive burger? I love conventions, and have truly missed their presence in my life this past year. I can’t wait for them to be back again! I’d like to provide a little tidbit on what to expect if you’ve always been fascinated by these gatherings of greatness or have ever considered attending. This is by no means a comprehensive list of every piece of advice or every convention in the area, but hopefully it’ll get you started.

Where do I start?

There are usually a “main three” in Portland my partner and I like to frequent — Rose City Comic Con (RCCC), Wizard Con Portland (WC) and Kumoricon. RCCC and WC are more comic-oriented, while Kumoricon is more anime-oriented. My partner and I aren’t super into comics, and I’m not into anime, but we feel like there’s an inclusion of many sources of media at these conventions. All celebrate pop culture, and offer merchandise for video games, tv shows, books … you name it. There are some smaller cons in Portland we haven’t checked out yet, and we’re interested in checking out some Oregon conventions outside the Portland area. We’ve also attended Seattle’s PAX West in the past, which I highly recommend if you love everything video games like we do. My partner and I are interested in checking out some other Washington conventions in the future as well.  RCCC, WC, and Kumoricon are all in the fall or winter, and PAX is in the summer. Convention tickets usually range between $40-70 for a full weekend pass, but of course, this varies. You can also purchase a one-day pass if you want to test the waters.

Do you have to cosplay?

No, absolutely not. There are plenty of folks in their regular clothes. However, cosplaying is really, really fun. You can start small and purchase your entire costume online, or pick a character that wears everyday clothes that are easy to find. Or, you can get a little more advanced and try out sewing and/or crafting parts of your costume. It’s rewarding and exciting! It’s a highlight of convention season every year to recognize folks in costume from media my partner and I both love, and also, to be recognized! Having a starry-eyed con-goer ask to take your picture is a pretty sweet feeling. There’s usually a lot of workshops and panels during a con about cosplaying and how to make props if you’re interested in learning. If you are cosplaying, I recommend checking out social media or convention forums to see if there are any meetup groups for the media you’re cosplaying from! Usually there will be a costume contest at a convention, and that’s a great way to see the amazing talent on display.

What is there to do?

A lot! My personal favorite part is browsing the artists’ alley. There are so many cool posters, keychains, stickers, and a ton of other kinds of merch I won’t even think of before I see it! There’s usually a lot of stock for things that are current and popular, but there’s a particular excitement that ignites inside me when I see merchandise for something older, or less well-known. I’ve scored some truly awesome finds, and it feels great to support local creators. You can also attend panels, which are usually on a variety of topics, and simply people-watch. I love walking around and seeing everyone’s cosplays, as well as being asked for pictures. Always ask someone before taking a picture, and don’t touch anyone’s cosplay or body without their consent. There’s plenty to do the entire weekend, but you can always try just going for one day if you’re unsure about how you’ll like it.

I hope you’ll give convention-going a try if it sounds interesting! This year, it’s a goal of mine to try selling my handmade soap in an artist’s alley.  For now, I simply dream of going back. Hope to see you there!